The Restoration of Molino La Ratonera

When Kath and Andy bought the mill in September 2004 it was still being used by the local baker whose family had owned the site for generations.

Milling had stopped some 15 years before when his father had stopped working but the huge wood fired bread oven was still being stoked with olive wood every night.

The condition of the buildings varied from "in need of extensive repair work" to barely visble.

The building most in need of urgent help was the mill owner's house.

This is a more recent structure, probably the turn of the century, but built on older foundations.
Water leakage from the mill channel had eroded soil from under the basement level and left a void over 1 metre deep.

The centre of the building was sinking and breaking away from the ends.

This was a complex and dangerous job but revealed the true size of the lower mill.

Once the structure of the new building had been completed work could start on the renovation of the mill owner's house.

The old roof and beams were removed, the structure strengthened and a new set of beams and covering installed

All the old rendering was removed and the entire building re-rendered.

The restoration of this fine old house is now complete and it has been decorated in a traditional style to provide luxury accommodation for up to 8 guests.

Repair work on the mill tower

The next phase was to rebuild the old stable block and kitchen buildings, repair the mill tower and replace the roof on the upper mill.

The mill roof gets it's first new timbers

The final phase was started in November 2007 and involved major structural work on the upper mill house mill and completion of the stable block and old kitchen.

The whole site showing the new buildings still in render, the repaired tower and the roofless mill house

This was a massive project taking 6 months involving the installation of a new floor in half the building, refacing the walls and the construction of a large kitchen.

This was completed by mid 2008 and the terrace in front of the mill has now been recobbled using stones recovered from the site.

Once the project was completed we had all 6 houses available.

The last job was to build a replica mill wheel.

This is now done using elm from the site and reusing iron bands found during the restoration.

Watch the short video of the new mill wheel in action powered by water from the sixteenth century tower.

More about the Mill

How can we help you? 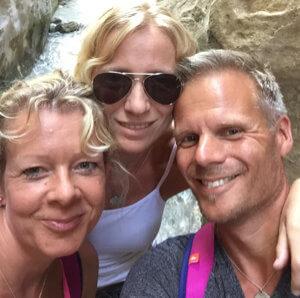 Whatsapp Molino La Ratonera
Hello, how can we help you?